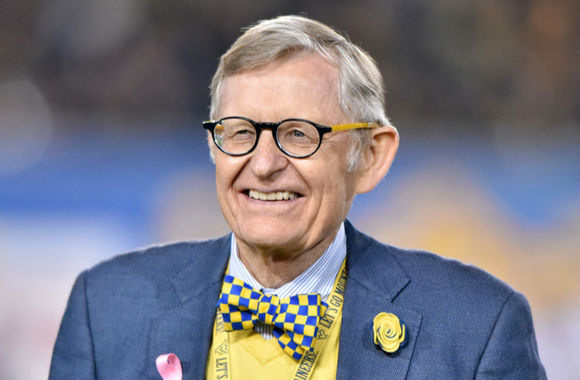 We are very excited to recognize E. Gordon Gee, President of West Virginia University as a 2020 Elite Leadership IMPACT Award recipient in education.

President Gee is known for his straightforward approach to things, his bow ties and the hundreds of selfies he has taken with students. He is one of the best practitioners of social leadership you will ever meet or hear about. This is demonstrated by his extensive use of social media to communicate and connect with his audience. He has tens of thousands of Twitter, Facebook and Instagram followers. Additionally, he has been known for showing up at student parties where he will socialize with students and take selfies until late into the night. How many university presidents have you seen at a student party where donations were not directly at stake?

Along with his social leadership, President Gee uses humor as part of his carefully crafted leadership vision. By utilizing these strategies, he is able to effectively respond to challenges at the university. For instance, after a big football win one season many students behaved unruly. Instead of waiting until Monday to send out a memo or email to the students, President Gee sent a Tweet out to all his followers stating that their behavior was not acceptable. The students responded by taking pride in their school and stopped the behavior almost immediately. This would not have been as effective if he hadn’t already established a relationship with the students through Twitter as a normal channel of communication. So, it was not a surprise for them to receive a Tweet from him.

Behind all the jokes, selfies and videos, President Gee is a skilled social leader embracing the technology that his constituents utilize. More CEOs from universities and other industries should follow his lead to become better leaders and better communicators.

Read the articles and watch the videos below to see how President Gee relates to his constituents. Thanks, President Gee, for your example of elite leadership.

“A truly great university is a nucleus of artistic expression.
It fosters creative, critical thought, and serves as a platform for civil discourse.”
– E. Gordon Gee

Dr. E. Gordon Gee is one of America’s most prominent higher education leaders, having helmed universities for more than three decades. In 2009, Time magazine named him one of the top 10 university presidents in the United States. Recently, the website Great Value Colleges named him the nation’s top university president.

Taking the Next Steps Together to Slow COVID-19, West Virginia University, March 2020

Why Some State Universities Are Seeing an Influx, New York Time, June 2020

Gee Pleased with Pandemic Performance, Urges People to get the Vaccine, WAJR-Radio, December 2020