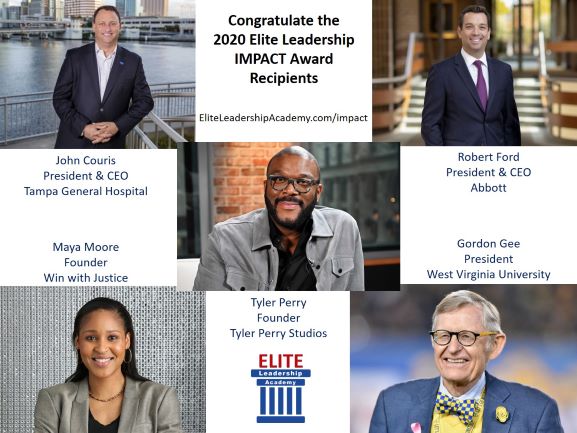 Please join us in congratulating the 2020 Elite Leadership IMPACT Award recipients. These recipients, from a variety of industries, were selected by our Awards Committee from external and internal nominations for their practice of leadership during 2020. Last year was a very challenging year for all of us and the common thread with these recipients is their leadership in the pandemic, leadership on social justice or leadership in both areas.

Please click on their names below to read more about how their leadership made an IMPACT in 2020.

John’s mission is to make Tampa General Hospital (TGH), a $1.5 billion nonprofit academic health system, the safest and most innovative academic health system in America. As a leader in the health care industry, John has achieved success through innovation, technological integration and strategic collaborations.

Robert succeeded Abbott’s long-time CEO, Miles White, on March 31, 2020 right at the beginning of the pandemic. Mr. White was also a mentor for Robert. According to the World Health Organization, testing will be the key to beating the coronavirus pandemic. Robert Ford and Abbott, stepped up to help make this come to fruition.

President Gee is known for his straightforward approach to things, his bow ties and the hundreds of selfies he has taken with students. He is one of the best practitioners of social leadership you will ever meet or hear about. This is demonstrated by his extensive use of social media to communicate and connect with his audience.

In 2017, Maya Moore was named Sports Illustrated’s Performer of the Year after leading the Minnesota Lynx to their 4th WNBA Championship. This was after winning back-to-back NCAA Women’s Basketball Championships with the University of Connecticut, a WNBA Finals MVP, two WNBA All-Star Game MVPs, two Olympic gold medals and the WNBA Rookie of the Year Award. She was called “the greatest winner in the history of women’s basketball (with the best yet to come),” also by Sports Illustrated. In 2019, she decided to put a pause on her basketball career to help an inmate wrongly convicted of a crime.

Tyler is a world-renowned producer, director, actor, screenwriter, playwright, author, songwriter, entrepreneur, and philanthropist. He learned early on the value of reflecting in his life. After enduring a difficult childhood, he discovered the therapeutic benefits of journaling while watching an episode of The Oprah Winfrey Show.