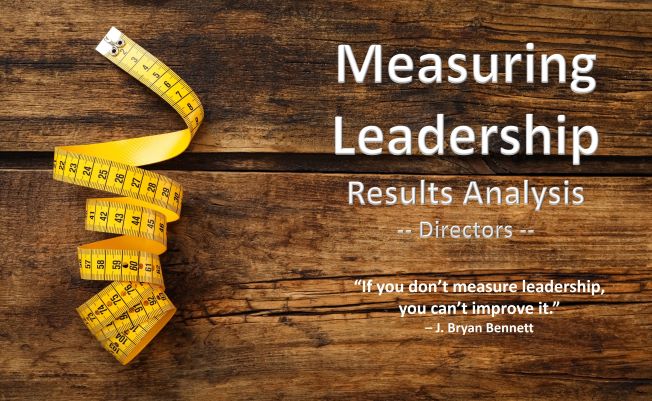 We have already released analysis from our Leadership Impact Assessment (LIA) for the C-Level Executives and Vice Presidents (see all of the results and the LIA background at MeasuringLeadership.com). To reiterate, it’s important to measure the outcomes from leadership training, but most organizations don’t incorporate it for one reason or another. Without any way of measurement, the individual and/or organization can’t empirically know what needs to be improved.

“If you can’t measure it, you can’t improve it.”
– Peter Drucker

This data is from people who have taken the assessment before one of our onsite or online leadership training programs through January 31, 2022.

In this article, we will examine results from the self-reported Director level participants, which comprise 20% of the data population.

The Director results is probably indicative of their aspirations at this point in their careers, which is very similar to the Vice President’s mindset. The Directors though are taking their aspirations to a new level and recognizing the importance of Reflecting and Coaching. If anything, they are at an inflection point in their careers. Their next move could be their most important and set the tone for their long-term goals.

Mentors and coaches are critical for leaders at this stage in their career. After this level, it will become more difficult to find and build a relationship with a mentor who can add value to their career. Although we combine coaches and mentors in the Coaching dimension, they serve different purposes and a leader needs both for their long-term success.

Most people would conclude that the Directors population are on the right track and nothing needs to be done to improve their leadership. We would argue that statement is only partially true. Directors have had a taste of leading larger teams and most probably want more. It is at this point in their career that they should be encouraged and helped to fully embrace the nuances of their leadership potential and formalize their regular practice of leadership.

What do you believe could be the reason for the Directors results shown? Add your thoughts in the comments below.