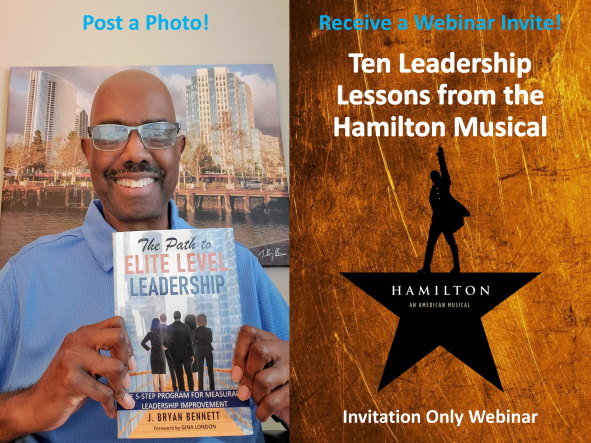 Receive an invitation to the exclusive webinar, “Ten Leadership Lessons from the Hamilton Musical” by posting your picture on social media (LinkedIn, Twitter or Instagram) with the book, “The Path to Elite Level Leadership.”

Tag me @jbryanbennett and/or #elitelevelleadership and receive an invitation to this exclusive webinar in mid-December. Space is limited.

Posts must by made by midnight 12/4/21.
Date and time will be confirmed via direct message.

Order your signed copy at: EliteLevelLeadership.com. Order an unsigned or Kindle versions on Amazon at: https://amzn.to/3wCdXZR.

Bonus points if you write a review.

The hit Broadway musical Hamilton tells the story of American Founding Father Alexander Hamilton using hip-hop and songs. It has become one of the highest grossing Broadway musicals ever – and is still growing.

There are many leadership lessons from the musical about Alexander Hamilton and the other Founding Fathers as well as lessons in the creation of the musical.

In this fun and inspiring session, we count these leadership lessons “Ten Duel Commandments” style just like the musical, only without the singing and dancing.