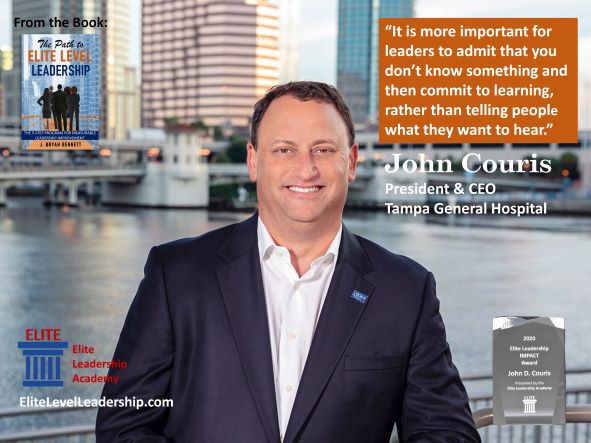 “It is more important for leaders to admit that you don’t know something and then commit to learning, rather than telling people what they want to hear.”
– John Couris, President and CEO of Tampa General Hospital

From the book, “The Path to Elite Level Leadership.”

Learn the program. Be accountable. Improve your leadership!

I’ve followed John’s leadership online for several years now. He’s a very engaged leader who does rounds with the medical and non-medical staff at his hospital. John is also one of the recipients of the Elite Leadership Academy 2020 IMPACT Leadership Award. In his profile, we noted that “he regularly shadows his staff, not in a suit, but in the uniform appropriate for the team he is shadowing. He has worked hours at a time in nursing, as well as cleaned floors and toilets and done rounds with residents and professors. He has also worked with phlebotomists, delivered meals and transported patients to keep in touch with his team by ‘walking in their shoes.’”

TGH was recently recognized as a Top 10 Best Smart Hospitals, being one of only 10 hospitals in the world to make the list and one of only 3 in the United States to be recognized.

I’m happy to include John’s thought leadership in the book. We all could benefit from his leadership example.